The customers, a young couple, initially asked to offer the option of a planning solution that would allow dividing the apartment into a guest area and a private one for them and their little daughter. It is proposed to design the central part of the apartment as a studio, attach a kitchen to it, dismantle the openings on the loggia. The space between the former kitchen and the bathroom was combined into one, but visually delimited by a bar counter and original drywall structures.  Modern minimalism with Oriental motifs. The podium for flowers is decorated with mosaics.

The apartment uses various stretch ceilings and original lighting. The guest node was expanded, a shower cabin was placed. The corridor was decorated with a “wild” stone and lamps, a dressing room was organized for storing clothes. Niches for interior items were designed in the bedroom, and the doorway was shifted so that a wardrobe could be installed. The ceiling was made in the form of a circle, a matte stretch ceiling and lamps were installed.

To add a highlight, a bubble fountain was designed — a glass wall in the living room, behind which water plays. A large bright sofa was placed next to it, opposite there was a home cinema — a recreation and relaxation area. 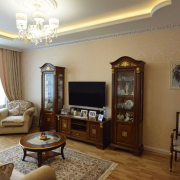 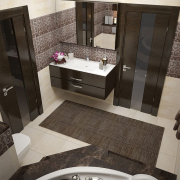 How to design the bathroom interior? 6 hot trends.

“Panel”. Design of a two-room apartment. 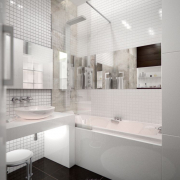 Design features of a modern bathroom* 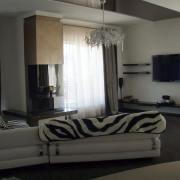 “The concept of home space”. Design of a three-room apartment.
Scroll to top