A successful, self-confident man, giving his hundred-meter dwelling into the capable hands of professionals, set a task: minimum redevelopment, maximum functionality. A talented group of architects did just that – they limited themselves to transferring one partition, which made it possible to expand the living room and change the entrance to the bathroom – the first step towards functionality was made.

The living room is a zone of relaxation and, at the same time, authoritarianism – floor lamps that are categorically unsuitable in scale are out of the general tonality of the space. However, this discrepancy is the main advantage of the living room. And a home theater with a high-quality speaker system is an ideal space to relax after a hard day. In the living room, as well as in the whole apartment, as a floor covering there is a parquet board made of natural wood, which emphasizes the expensive minimalism of the entire interior. Softening accents that add sophistication to the living room are also light long curtains and white sofa upholstery. Comfort, emphasized by shapes… The minimalist kitchen is made in the same brown and white color scheme as the entire interior. A striking feature of this room was an extraordinary solution to the decoration of the walls and ceiling — the floor smoothly merges into the walls, creating one harmonious canvas. The lines are repeated with precise symmetry, which places its own, clear and distinct accents. Men’s territory. A small kitchen space turned out to be enough to create a dining area in the center, which will be conditionally decorated with a ceiling lamp.

On the men’s territory, everything should be autonomous — an individual bathroom of the owner and a separate one for guests. For himself, the owner of the territory chose black in combination with white plumbing. In the master bathroom, it was decided to abandon the bathroom as such, strict male asceticism demanded a shower panel equipped with all the necessary functions for maximum pleasure. Black tiles, regular, clear forms of furniture in the bathroom – everything is subordinated to the general idea of the interior – minimally, functionally, logically. No frills, nothing that clutters and distracts. From pleasure.

The guest bathroom is made in brown wenge with the use of natural materials in the decoration. In terms of area, it is much larger than the owner’s, and there is not only a bathroom, but also a washing area and a boiler room. More accessories are used in the interior of the guest bathroom. Suspended plumbing – after all, this interior is distinguished not only by minimalism, but also by modernity. A comfortable, large washbasin allows you not to think about splashing water on the floor, and the bathroom itself was the perfect completion of the entire interior.

Men’s territory. The entrance is restricted to outsiders. Only those who live to the maximum, use the minimum and appreciate expensive functionality. Real men. The masters of life and the inhabitants of the “territories”.

A little bit about interior design 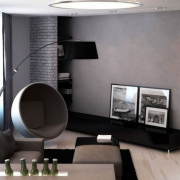 “”Urban ethno”. Design of a three-room apartment.
Scroll to top