The traditional Japanese bedroom has a minimalist style, smooth lines, furniture and accessories of small sizes. This style of design appeared in Japan at the beginning of the fourteenth century and sometimes relies on “Zen” – a Japanese word describing the sensations in a state of meditation.

The basic principle of design is to use only the most necessary elements. Today, you can create a Japanese bedroom interior in various ways.

Traditionally, neutral colors such as white, cream, beige and brown are used for the walls and accessories of the Japanese bedroom. A modern Japanese room can be painted in delicate tones of green and blue. If you do not intend to create a traditional Japanese interior, use the shades you have chosen on the walls or bedding. Nevertheless, the walls in Japanese design are decorated with wallpaper made of natural fiber, for example, from Chinese nettle.

The bed occupies the main place in the Japanese-style bedroom. In the modern Japanese interior, it is presented in the form of a platform that lies on the floor. A traditional Japanese bedroom uses a mattress that is spread over a tatami mat (a mat made of straw). It is also used for solid floor covering. Bedside tables are not typical of Japanese interior design, but if you decide to purchase them, choose furniture with clear lines.

In a modern bedroom, you can see low ledges around the perimeter of the room, which serve instead of bedside tables. If you have a large room, you can include a low table and huge decorative seat cushions in the interior design.

Usually white bed linen is used in the Japanese bedroom. Nevertheless, it is not uncommon to find black bedding in modern design. A combination of white sheets and a black or colored bedspread is also allowed. If you want to move away from traditional Japanese design, use bed linen in bamboo or floral patterns. Sakura, a Japanese cherry blossom, is also suitable for this.

Look for traditional Japanese underwear with impressions of the crest of the wave, called “seigaha”, or an old umbrella “bangasa”.

To divide the room, use “shoji” partitions, which are traditionally made of wood with soft rice paper. You can put shoji lamps on the bedside tables, and floor lamps on the floor. The walls should be decorated with Japanese curlicues, handmade fans and reproductions of Japanese prints known as ukiyo-E. As other accessories that are perfect for a Japanese bedroom, you can choose a dwarf potted tree and a kimono. When creating a Japanese design, do not forget to adhere to the basic rules of minimalism. 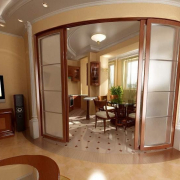 “Afroremont”. Design of a three-room apartment.

“A wonderful transformation.” Design of a two-room apartment. 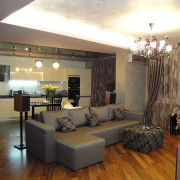 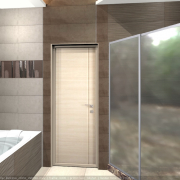 Modeling the interior of a room on a computer