The avant-garde is an artistic and architectural style that emerged under the influence of the revolutionary sentiments of the twentieth century, which were imbued with the youth of that time. The fundamental characteristics of this style were the rejection of traditional classical canons and the creation of new modern forms, consonant with the mood of the coming changes that was in the air at that time.

I must say that the peak of the popularity of the “avant-garde” style came in the post-war years, which became a period of reassessment of moral principles and values, changes in human consciousness. This style is for strong, brave and determined people who are not afraid of drastic changes, experiments and changes.

In this style, the main emphasis is on the contrast of shape and color, a combination of seemingly incompatible interior items and materials. The avant-garde style is characterized by bright and pure colors, including: white, saturated black, red, yellow, and green. At the same time, a simultaneous combination of several colors is quite acceptable, which gives the interior dynamics and expression. Contrast is applied even in the decorative design of walls – so, one wall can contain a diverse color palette, or different walls can be painted in different monochrome colors.

When decorating the interior of this style, a variety of materials can be used, but preference is given to the most modern finishing materials that are easy to care for, practical, durable and have an excellent appearance. So, materials such as decorative plaster, metallized wallpaper, suspended ceiling structures, modern paint and varnish compositions, as well as laminated coatings imitating wood are widely used.

Furniture of the “avant-garde” style is also a kind of experiment, since it can have both a clearly rectangular shape and a rounded one. Remember that the “avant-garde” is not characterized by small decor and simple decoration. This also applies to the design of such an important element of decor as curtains, which must be made of modern materials, and in their brightness and color must contrast with the decoration of the walls. Focus not on the decoration of curtains, but on their color scheme and original shape.

Choosing furniture that should meet all the requirements of this style, focus on the following interior items: a modern wardrobe, a liquid crystal TV and a computer monitor, while tables, chairs and beds should be made of metal and feature increased functionality. So, a folding kitchen table and a bed built into the wall or a wardrobe will come in handy. Remember that the room in the style of “avant-garde” should have an individual character, thereby reflecting both the inner world of the apartment owner and his ambitious intentions and aspirations to develop without stopping there.

When lighting, light bulbs are used, which are built into the ceiling niches, which gives a certain intimacy and romance to the interior. And although such a decor will look most appropriate in the bedroom, however, the kitchen and living room can also be made with such a decor. If you are an extraordinary creative person who thinks outside the box, who knows how to appreciate originality and uniqueness, then this style will become a reflection and continuation of you and your inner world, thereby creating coziness and comfort in the house, which will become a fortress protecting you from outside influence. 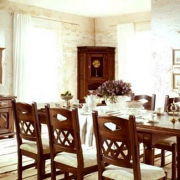 The concept of style in the interior 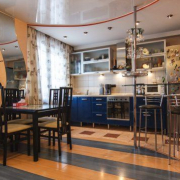 Kitchen in the studio 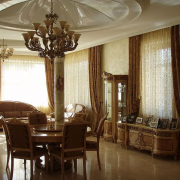 Classic interior of a country house 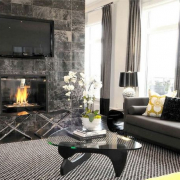 Modern in the interior

Interior design in the style of minimalism
Scroll to top